Construction Ontario and Merit Ontario stand in solidarity with friends, family, and the people of Ukraine. Visit the Canadian Red Cross to see how you can help Ukraine and surrounding countries. 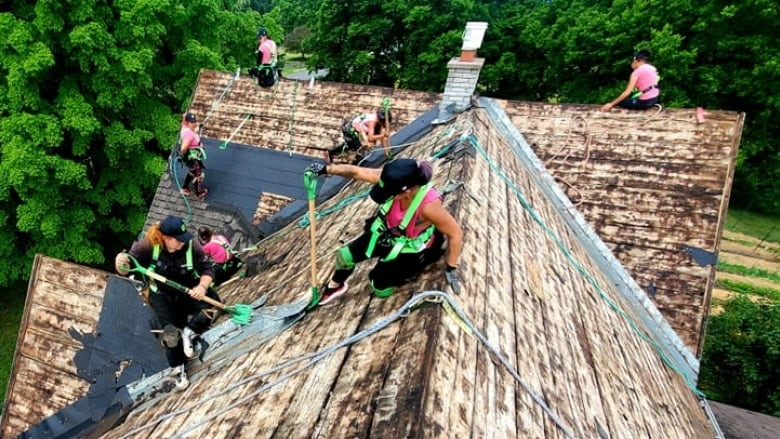 When Michele Vindum started having problems with her roof, she began searching for a company to replace it, under one condition: the roofing team would be exclusively women.

“I’ve always been very aware, as a woman who used to work in the sciences … that there are systemic barriers to women entering non-traditional trades,” Vindum said.

Vindum, who lives north of Belleville, Ontario, was on a search that led her to Samanntha De Coteau, a Welland, Ont., roofer who goes by “RooferGirl” on social media.

Following Vindum’s contact, De Coteau contacted tradeswomen across the country. As a result, she has assembled the “Summit Sisters,” a group of women who advocate for a better representation of women in the trades.

“Everybody was just so interested in it, so supportive,” De Coteau explained. “All the girls said, ‘Yeah, I’ll come, I’ll do it.'”

It took De Coteau three-and-a-half hours to get to Belleville, and others came from Alberta and Saskatchewan to help with Vindum’s roof.

De Coteau said she was intimidated when starting out her career, as a roofer, but she’s thankful she persevered since her career in trades has been incredibly rewarding.

Looking to get your foot in the door in the trades industry? Get started with a career in the construction industry today by visiting our job bank! Click here to learn more here.

“I’ve always been up for supporting women and empowering women, especially in the trades, because that’s what empowered me and changed my life,” she added.

Vindum said the Summit Sisters did a great job despite never having worked together before.

“They did it in record time. And it’s absolutely beautiful,” she said. “The roof is fantastic.”